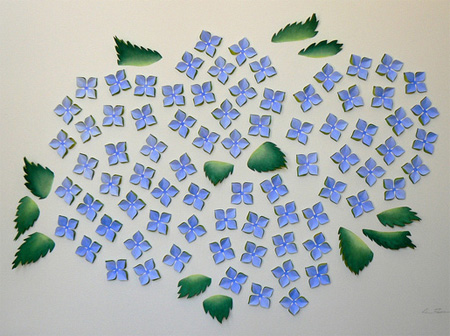 When visiting the small town of Kitagawa in Japan, what you may expect to find there may differ widely from your actual experience. You may expect to find traditional Japanese bath houses, gardens of lotus flowers or maybe traditional farming. Maybe a memorial for Nakaoka Shintaro, one of the founders or modern Japan, who was born here in 1838.
However, a complete European style garden with European trees and flowers, two connected ponds and lots of water lilies might seem a bit out of place. In fact, the only local feature of the garden would seem to be the Japanese bridge spanning over the link between the two ponds. A closer look at the bridge, set among these ponds and surrounded by water lilies, might even make that seen a bit out of place. There is something eerily familiar about the setting, and even with bridge and all it is not something related to Japan. Rather, the idea of something French springs to mind. Because has not this exact scene appeared in European art? In fact, was there not one particular artist that painted this particular setting again and again?
And then it dawns on you. The Japanese bridge was painted by Claude Monet, French impressionist, in his garden in Giverny, most famously in the painting Water Lily Pond from 1899. And the water lilies in the ponds were similarly painted by him continuously. Only, of course, Giverny is in France and this is most certainly Japan. Something is still not quite right.
The explanation for this Monet garden in Japan actually goes all the way back to Monet himself. Many Impressionists, and most definitely Monet, were fascinated by Japanese art. He participated in the so-called Japanese dinners where Japanese art was discussed, he was close to some Japanese artists, he even portrayed his wife Camille dressed up in a Japanese outfit and he had about 250 Japanese prints decorating his house in Giverny. In Japanese art, Monet saw a reflection of many of his own views on art. The way Japanese art, especially the prints, focus on simplicity i.e. that from elements completely refined they draw the best aesthetics. The idea of simplified movement; the way a simple print reveals new details the more you observe it; the way beauty is in the indispensable elements, rather than in the amount of colors and decorations. Monet himself identified with these views and attitudes towards art. Meanwhile his own Japanese art collection also inspired him and helped him see there are more ways to do landscapes. This collection also introduced him to e.g. Japanese bridge design.
However, he did not install the bridge merely from his aesthetic requirements. Monet designed his garden so that one pond would be in the shade, one would be in the sun. However, with a curved Japanese bridge spanning the narrow point between the two pools, the rays of the sun passes beneath the bridge and light up the shaded area, where the water lilies are in the shades. This creates a shade and light effect, and it was the observation and study of this that was at the heart of his water lily paintings in Giverny.
The Japanese, in turn, also responded to Monet’s style, which in many ways reminded them of their own. That is why Monet still today is so popular in Japan, and that is why it was decided in that to mark the millennium, a copy of Monet’s garden would be established in Japan. More then 200.000 visitors came to see Monet’s garden in Japan on the first year alone, and they are still coming. So whether in Giverny or in Kitagava, you can be blessed with the view Monet shared as he painted his famous Japanese bridge, spanning over the water lily pond in his garden.

READ  Guitar Playing Is Something Most People Can Learn